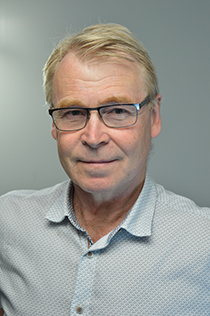 My first academic training was in social sciences, and it was followed by a few years as a rock musician during 1979-83. This music brought me in contact with electronic instruments and electroacoustic music. In the beginning of the 1980s I made some music in collaboration with John Persen, before I traveled to the United States and studied computer music in New York. In 1990, I returned to Norway, and following a period a period of re-establishmen there while being Director of the organization Ny Musikk (New Music), I was brought in to build up NOTAM in 1993. From 1993 – 2010 I was responsible for founding and building up this institution, academic and artistic profile, research and development, mediation, education administration and economy.

NOTAM has been a pioneer organization in Norway for both the digitalization of music and for the cross-disciplinary development facilitated by the digital technology. My work has thus given me a broader opportunity to contribute to the development of the music- and art communities than the work in one organization normally does, by different positions in boards, committees and professional contexts. One example is the arts portal Artnet Norway that was established and built up by NOTAM until it was dissolved as a separate organization and moved to ABM-development’s information department. ABM has now been closed down, and there is no longer a portal for the arts community in Norway. I was on the board of Ny Musikk and The Ultima Festival for several years during the 1990s, and served 7 years as an officer on the board of International Computer Music Association, that every year is responsible for the International Computer Music Conference (ICMC) somewhere in the world. I was also involved in the startup of the DAFX-conference, which is a more pointed, mainly European conference on musical signal processing. Every year I evaluate articles and music submissions for conferences such as DAFX, NIME and ICMC, in addition to editorial work with the journal Organised Sound.

In addition to the administrative, academic and artistic responsibilities at NOTAM, there have been a few projects where my personal research has found arenas. From 2008 can be mentioned the exhibition Absorption and Resonance, and from 2010, the symposia Soundscape in the Arts in April, and Electronics meet the Challenges of the 21st Century, at the Warsaw Autumn in September can be mentioned. In May 2011, NOTAM made the symposium Technology and Aesthetics, where I had a hand in the programming. Of more international projects, Integra and Composing with sounds can be mentioned. I have recently been engaged into a larger book project about Nordic Avant-garde, and in 2019 I published a book “Elektrisk Musikk i Norge” about the Norwegian history of electroacoustic music and relevant music technology.