This installation was a commission from the Hyatt Hotel in Berlin in conjunction with the Magma festival in 2002. The Magma festival was a festival of Nordic contemporary music, a biannual production by one of the Nordic composers’ societies, lasting from Nov. 23 to Dec. 2.

The installation was commissioned the lobby of the Hyatt hotel in Berlin, and the location had to be considered thoroughly in the process – lobby guests do rarely visit hotel lobbys to experience art, so the decision was made to give this installation a «muzak-character» there – coloring, but creating an atmosphere rather than calling attention to itself.

Marlene Dietrich’s name appears both inside and outside of the Hotel, which is located near Potsdamer Platz. Considered in connection with the need to create something for small amplitude playback, this resulted in choosing a Marlene Dietrich song as material for the installation, which sonic output was intended to reintroduce Marlene Dietrich into the hotel both as a ghost and in a «current remixed» version. A two-part installation resulted – where one part would represent the faded and somewhat distorted sound images of a long gone past, and the other intermittently bring forward rhythmical and tonal patterns from a recording of her song, as contemporary abstract computer-processed sounds.

The ghost from the past

The faint ghost of Marlene Dietrich appeared through an ultrasound speaker from Sennheiser, placed on the mezzanine in the lobby. In principle, the signal from such speakers emerge as sound at the area where the signal meets the wall. The signal was projected to a corner, which gave good reflections in a wide angle. The signal thus appeared to be floating in the lobby, and seemed to come from nowhere. It blended completely into the lobby muzak, and the result was that Marlene Dietrich occasionally was audible for the lobby audience as an abstract and atmospheric element. The speaker was driven by a 45-minute long CD-track played in a loop. The CD-track was more than 50% complete silence, and with new elements starting every three minutes or so. The material was snippets of voice, filtered to a narrow band to fit the speaker’s frequency range, mixed with variations of spectrally spread versions of the same vocal extracts, and some processed excerpts of instrumental cut-outs from the recording. 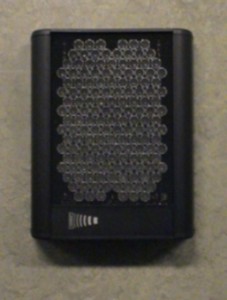 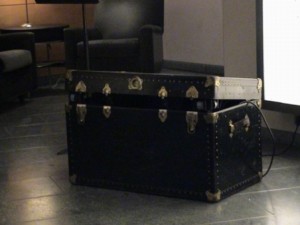 The ghost in the machine

The remixed and interpreted Dietrich was projected from a big trunk placed on the lobby floor. The trunk was fitted with four sensors, which each accessed any of eight sounds selected randomly when triggered, in all 32 different sounds. The triggering was done by passers-by, fed through a NOTAM MIDI interface into a Macintosh G4 laptop, where the control of sound selection and playback was executed by an MSP-patch. The overall amplitude and pause between soundfile playback was adjustable on the front panel of the patch, which required a number of seconds of silence before the next sound could
be started. At most four sounds could be playing at once.

The sound material was again Dietrichs’ voice, but this time unrecognizable as song. However, the rhythmical – or melodic identifyers in her song were clearly distinguishable, alone – but not together. The sound was a highly abstracted version of Dietrich, which only made sense as a reference in conjunction with the speaker on the gallery. Two parts of the same ghost: Direct memory of times as they were, and the sort of memory that a remix entails.

This is what a few seconds could have sounded like.

Things that should’ve been done differently

The noise from the lobby bar was not properly taken into consideration, and the sound in the trunk would have benefited from different filtering in order to compensate for this added noise from the surroundings.

The installation was realized as a collaboration between Ivar Frounberg, Tor Halmrast and Jøran Rudi. The concept was developed and refined by all three, Tor Halmrast contributed some samples and comments in the composition process, and Jøran Rudi developed the sounds and made the actual composition. Henrik Sundt and Asbjørn Flø provided MSP-programming and building of hardware.

The sound installation was financially supported by
The Norwegian composers’ fund, Apple computer, and NOTAM – Norwegian network for Technology, Acoustics and Music.