– an installation by Åsa Stjerna

During 8. – 17. September 2011, Swedish artist Åsa Stjerna presented her sound installation Currents at the new opera building in Oslo, at the invitation of NOTAM – Norwegian Center for Technology in Music and the Arts, and as part of the Ultima Contemporary Music Festival. The opera building was completed in 2008, and is a landmark in the new section of the city that is emerging at the waterfront close to the central train station, where the airport train comes in.
Currents was based on scientific measurement data from inflow of warm waters into the North Sea, the North-Atlantic current and the melting of ice in the northern hemisphere. Data from an automatic research station north of the Faroe Islands are piped to servers at the Department of Meteorology at The Stockholm University (MISU), and from there they were sent on to Stjerna’s installation, where they were continually transformed into a sonic artwork that unfolded in real time. Thus, the artistic interpretation was directly linked to the global ice melting controversy, and while it was not the purpose of the work to provide answers, it pointed to interconnectivity in these issues, and mediated this through a real-time stream of information that affected us all. The aspect of interconnectivity was underpinned by the location of the Norwegian Opera that borders onto the ocean where the measurements were taken. 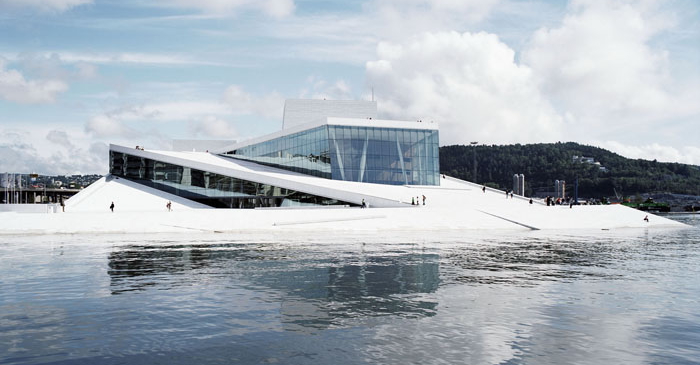 Sonification and interpretation
In sonification, sound is used to represent something other than itself, while at the same time constituting the surface of the work through its own sonic qualities. In a broad view, one can call all artistic works with sound for sonifications of artistic ideas; music, sound art, sound in performances and installations. This approach serves to reduce the importance of the traditional division lines between music and other arts; a division that becomes less and less relevant as the digital revolution marches on.

Currents was a sonification of real-time data gathered at the ocean floor near the Faroe Islands, where electrical current is induced as water flows past a cable. The warm water from the Gulf of Mexico is transported north on top of a similar stream of colder water moving south, and by using the measurement data to control the sounding results, one can say that Stjerna transformed the ocean stream phenomenon into another phenomenon. Both sonification and transformation processes depend on interpretation, and can never be a one-to-one processes – Stjerna states that “information will be lost, and intention added.”

Surface and articulation of space
Measured data were filtered into four different components, ionosphere and three different ocean currents, all which were used in the piece. The sound texture based on the ionosphere had a ‘glittering’, constantly moving sound texture, while two of the currents, both derived from measurements of tides in 12- or 24-hour cycles, were given drone-like qualities. The fourth signal, based on data from the North-Atlantic current, controlled the transformation and spatial positioning of these three sound textures in the exhibition space. In addition to these more conceptual aspects, the actual sounding result was important to Stjerna. She chose to use granulated samples, also derived from the measurement data, as her sound material, and the experience was that of small sound drops. This corresponds well with the “conducting” material that was piped in, and together with the site of the installation by the ocean, it formed an obvious reason why the installation worked very well in the context.

Currents was experienced by thousands of people during the installation period. Upon entering the opera lobby, the visitors would notice Stjerna’s soft intervention as being different from the arbitrary noise that normally fills lobbies, and from the din of the restaurant in the far end of the lobby, facing the water. Her careful approach expressed her interest in the borders of perception, and her work thus depended very much on the visitors’ listening intentions. At the amplitude level, the work could easily have been ignored by non-interested visitors, and carelessly folded into the background noise. Stjerna states that she has little belief in strong expressions that could contribute to acoustic overload – an approach she has also worked with in for example Sounding Esplanade, presented during the World Music Days 2009 in Växjö, Sweden. She articulates the spaces she is working in with measured and careful sonic interventions. 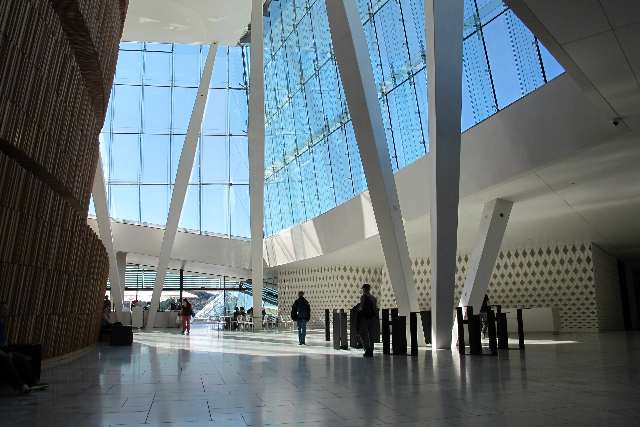 Granulation is a signal processing method where the sound is cut up into very small pieces, which individually do not sustain any of the sound’s spectral qualities or referential elements. One cannot recognize a sound through an individual grain, only through a sum of them. In Stjerna’s work, small drops of sound were projected from all directions; from speakers placed along the entire ledge by the huge windows, and from speakers that were placed on the second wooden tier for access to the main opera hall. The sounds were quite homogenous in origin, but they all sounded different due to the acoustics of the lobby, where the space itself shaped the sounds through processes of absorption and resonance of the spectra. The space was articulated through the sounds, and it is safe to say that the sound expanded the architecture, in the sense that listeners experienced the grandness of the space better through this sonification than through the eye, both vertically and horizontally. With this absolute dependency of the acoustic space of the opera house, the work became site-specific, and it is difficult to believe that Currents could retain its identity in another location; Currents would have been a different work. The installation appeared to be integrated in the architecture, and could certainly have been a permanent feature of the space, much the same as composer Arne Nordheim’s sounds that are distributed throughout the volume of the Oslo Concert House during intervals.

Physical and artistic negotiations
Physically, Stjerna’s installation consisted of eighteen small loudspeakers and two larger ones, a rack of amplifier- and signal routing equipment, and a computer that received and interpreted the data stream, while assigning pre-recorded samples for playback. 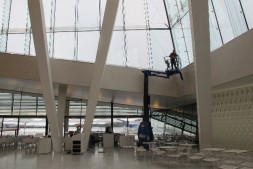 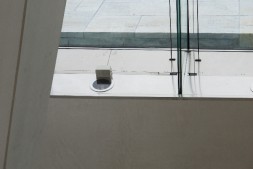 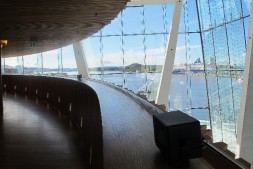 With this backdrop, it is easy to assume that technical aspects dominated the artist’s free and poietic processes. There was, however, no attempt to represent data directly; Stjerna did not map the site where the measurement data is taken, she was crafting a representation of the process, using compositional and real-time strategies in her diffusion. The conceptual aspects of connection and flow as processes were bound well with the sonic material, which was derived from the same material that controlled it, and it is worth mentioning that the conceptual aspects never overwhelmed the perceptual surface of the work. Currents was a work made for public space, and while it articulated this space, the space also formed the work, not only conceptually, but also physically. Currents would have remained an unknown work, had the Opera not opened its doors.

Acknowledgements and links
The installation was built with assistance from the engineer Manfred Fox, the programmer Florian Goltz (both from Berlin) and professor Peter Sigray from the Department of Meteorology of Stockholm University (MISU).