Construction Drive is a computer music game for Windows. The player performs the piece by driving in the game environment as if in a motorcycle simulation. The visual part of the game environment is modeled on Juan Miro’s painting L’estel matinal, and the sounding part of the game is constructed from sounds that are activated and mixed as the driver moves in the landscape. A performance of Construction Drive is an exploration of what the game has to offer, and there are few restrictions on movement placed on the player. The game can be quit and reentered at any time, but is over when the player has solved a riddle by combining the clues of recorded text that are randomly placed in the environment with every new game.

Interactive computer music has become widely popular among composers as a means for bridging signal processing and computer composition with the acoustic world and contemporary performance practice, allowing the musical competence of musicians to shape the electronic material. Also, interactivity is often an integral part of sound installations, where various actions by the visitors influence the presentation and processing of the material. Little work, however, has been done at the intersection of computer music and computer games. The computer game industry, however, annually generates more revenue than the Hollywood film industry as a whole, and is hardly a negligable sector of contemporary popular culture. Thus, computer gaming has become a tempting arena for creative work from an art perspective, an activity that in turn might contribute to enriching the gaming domain. Construction Drive aims to challenge the common notion that games are only entertaining, and that art is only serious.

Construction Drive is an art project that bridges computer animation and music. The sound material has been developed using computer music techniques, and is constructed with the intention of having an inner coherence that makes it interesting and rewarding to explore. The game is interactive, and contains both singular sounds and pre-rendered sections with particular musical significance. The graphical environment supports the treatment of the material as a type of musical game, and the interaction has the character of a driving simulation – through a landscape on a motorcycle. Musical training is not required – the construction of the work depends solely on the ear and eye – but the more experienced and critical user will have an easier time «getting something good».

Composing interactive music is most often quite different from writing music to be reproduced from a score. The composer yields varying degrees of control of the sounding material to users of the interface, be it a musical instrument, a sensor, or a higher level controller. Composing interactive music involves balancing the need for compositional control and development of material with the degree of freedom that performers need in order to have their impulses and real-time composition significantly determine the resulting musical form. This balancing act is equally important in all interactive music – for concerts, installations and games. The implementation of control features should be developed with the level of qualification of the performers/public in mind – there is for example a need for the public to understand the user interface in an installation in order to interact meaningfully with it, from their perspective.

In Construction Drive, the development of the music happens through the player’s movement in the game’s landscape, where place determines the sound material, and direction of movement, leaning angle and speed control the processing of the material. The sounding material is placed in the visual model, and with few restrictions it allows for maximum user freedom to select musical direction. In a sense, this kind of composition can be said to be a meta-composition – making a constrained environment for the actual composition only by defining the raw material and parameter scope for the signal processing. This idea is not new, historically speaking, and is commonplace among current composers that use random numbers and other forms for arbitrary choices in their processing or musical material. Many kinds of process-oriented sound installations employ similar principles for turning the audience into performers, through capturing movements or actions through sensors, and letting those data control aspects of the sound. There are, however, not many examples of interactive works situated within a game paradigm. Construction Drive consists both of a finished work and an interactive environment, and the finished work is a pre-recorded journey in the interactive environment – one of an infinite number of possible journeys.

A digital model of a landscape has been made, and the underlay is a surrealist painting by Juan Miro – L’estel Matinal (The Morning Star) from 1940. The images below show the combination of a scan of the original painting, the geological forms (where white represent higher elevations than dark regions), and the combination of geology and Miro’s painting. 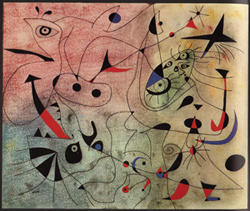 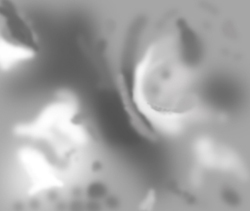 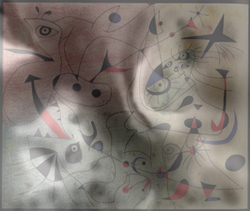 The painting’s «background» has been reinterpreted into a 3-D landscape, and Miro’s fantastic collection of disparate objects – loosely connected visually through a web of lines – has been modeled into 3-D objects that are placed in the landscape. Colors and textures in all the modeled objects have been kept close to Miro’s palette in L’estel matinal, while the «geological» formations are free reinterpretations. Some of the objects have been lifted away from the surface, and hangs above the surface or are turned into bridges.

Below are a few images, taken from various stages of the development. 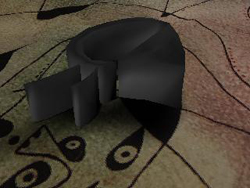 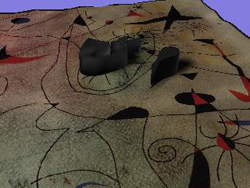 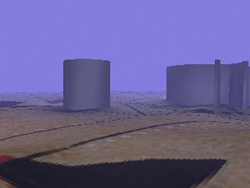 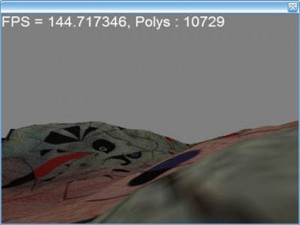 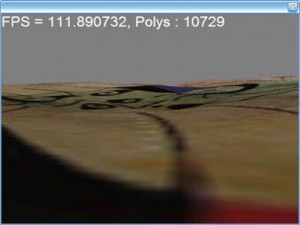 The painting has served as inspiration for the compositional idea of a type surrealist discussion consisting of recognizable ideas and words, but with little recognizable logic – in some ways akin to art’s claim of having an internal logic not easily explained in other ways than through the works themselves. The topic of Construction Drive, so to speak, is the identity and content of art.

The underlay and concrete reference to L’estel Matinal is not made clear for the player until briefly during the closing sequence, and since no particular emphasis is placed on the use of this particular image, only the players familiar with Miro or this painting will leave the game conscious of this reference.

All pictures © Jøran Rudi
Not to be used for publication without permission.